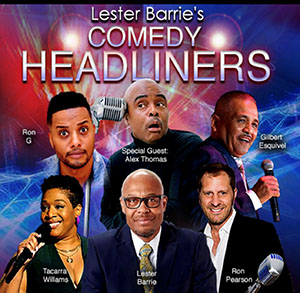 Join us for a night of hilarious and side-splitting laughter hosted by comedy promoter and comedian Lester Barrie.

Winner of best comedian over a young Dave Chappelle on Star Search, Barrie has recently performed his first stand-up comedy special “Super Saint” now available on Amazon. Lester has also performed his unique brand of “Inspirational” Comedy in clubs, colleges, and churches all over the United States, and abroad.

An AWESOME “date night”, “girls night”, or the “boys night out,” Lester Barrie’s Comedy Headliners promises to be the best comedy line-up anywhere in Southern California.